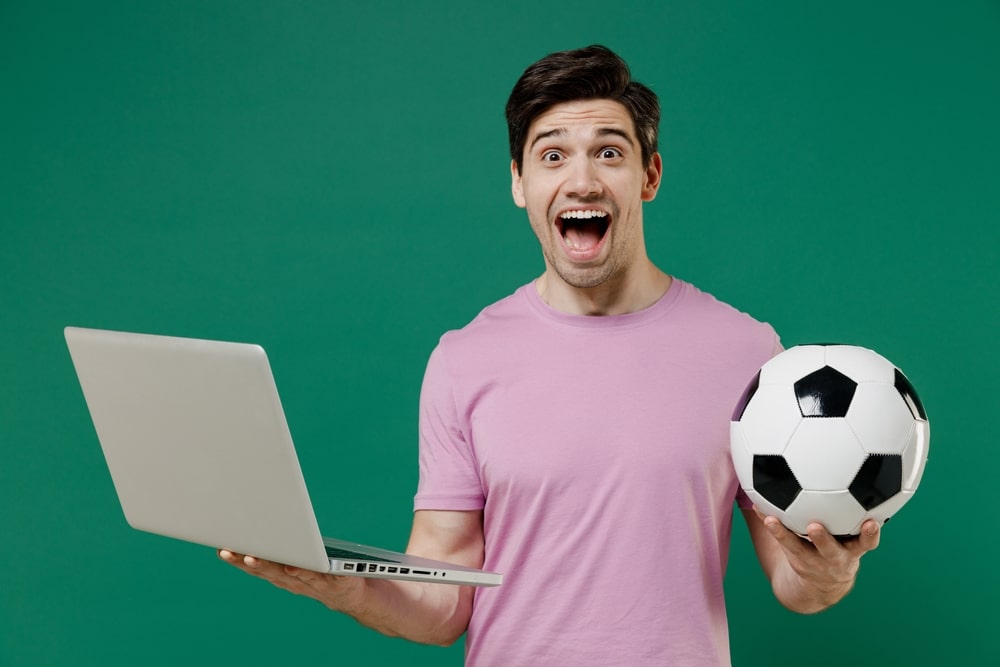 How to play Live Football Studio in Bitcasino

High rollers have already seen lots of sports-themed online slots that combine their favourite pastime with their sports of choice. However, table games don’t get that much redesign. Fortunately, Evolution Gaming has introduced a card game designed with a football theme: Live Football Studio.

Given that Live Football Studio is a title from Evolution Gaming, you’d think it can be played in popular sites such as Bitcasino and you’d be right. Live Football Studio is designed to look like the place where football analysts share their thoughts on the match. This table game combines sports betting with playing cards—truly the best of both worlds for bettors.

Live Football Studio is won by correctly guessing which team will win the match: the home or away team. However, this is a table game. Instead of a real football match, playing cards will be used by both teams. There is also an option to bet on a draw between the two teams. This option pays more than betting on just one team.

Just from reading the objective of this game, you’d think Life Football Studio is played just like baccarat. However, this game is much simpler to play than baccarat.

The game starts with you placing a bet on either the home, away, or draw. The dealer will then use a standard 52-card deck and hand out two cards for both home and away teams and the one with the higher total wins the ‘match’. Both home and away bets pay 1 to 1 while a draw pays 11 to 1.

Other features of Live Football Studio

Live Football Studio has a simple interface showing the stats for each team. You can also view the studio from different angles using the Switch View feature. Additionally, you can adjust the video quality of the game if you think your internet speed couldn’t catch up with the live stream. A live chat option is available so you can interact with the dealer and other players.

Since the game is set in a football analysis section, you’d also hear commentary about the table game delivered as if it is a professional sport.

Live Football Studio is a much simpler game to play than baccarat because all you have to do is place your bet and hope for the best. The best tip to winning this game is to avoid betting on draw. Other than that, it’s up to you whether you will bet on one team for consecutive rounds or you will alternate between the two teams.

Live Football Studio prides itself with its simple rules and the design that target football enthusiasts. Reviewers say this table game presents something unique while staying true to the original card game.

If you are new to card games, perhaps you can start with Live Football Studio first. Besides, it can even provide you with a bit of excitement from that football theme.

Can Live Football Studio be played on mobile phones?

Yes, Live Football Studio is compatible with mobile devices. You can also play it on computers that run on Mac. Whichever device you use, you are always welcome to join the football commentator’s table.

Are there any live football matches shown while playing Live Football Studio?

Can live casino bonuses be used in Live Football Studio?

If you sign up to an online casino with a live casino bonus, then you may use them to win real money. Make sure you read the terms and conditions before claiming your bonuses.

Yes, you can play Live Football Studio in your native language as the game is available in 41 countries. English and other European languages such as German and Russian are available. If you are a football fan from other parts of the world, Mexican, Peruvian, and Brazilian Portuguese languages can also be heard depending on where you are.

Can cryptocurrency be used to play Live Football Studio?

Since most online casinos now accept cryptocurrency as a mode of payment, you can use cryptocurrencies such as Bitcoin (BTC), Ethereum (ETH), and Tether (USDT) to play Live Football Studio. Using cryptocurrency to play can be advantageous as well as such a payment method is decentralized yet secure.
Bettors who also happen to be sports fans will surely enjoy playing this unique table game by Evolution Gaming. Live Football Studio gives bettors an exciting environment to play cards plus it is really easy to learn. Try this game out on sites such as Bitcasino and you will see it is just as exhilarating as sports betting.

2022-03-23
Previous Post: A beginner’s guide to playing Spribe’s Plinko
Next Post: Why you should start playing online craps